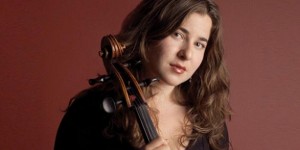 On the back of the universally outstanding reviews for her debut Decca album of Elgar & Carter Cello Concertos at the beginning of the year, Alisa Weilerstein caps off an eventful 2013 with the recording named Album Of The Year 2013 by Norman Lebrecht on Sinfini. Click here to read Norman Lebrecht’s 5 star review. Not only that, the album ranked as one of just a handful of classical albums in the Sunday Times Top 100 Albums of the Year. April 2014 sees the international release of Alisa playing Dvorak’s Cello Concerto with the Czech Philharmonic Orchestra under the baton of Jirí Belohlávek. Stay tuned for more news on this exceptional young artist!

American cellist Alisa Weilerstein has attracted widespread attention for playing that combines a natural virtuosic command and technical precision with impassioned musicianship. At 28 years old, she is already a veteran on the classical music scene having performed with the nation’s top orchestras, given recitals in music capitals throughout the U.S. and Europe, and having regularly appeared at prestigious festivals. She is also a dedicated chamber musician.