Global superstars One Direction announced today the highly anticipated dates for the North America leg of their worldwide WHERE WE ARE 2014 stadium tour with a special performance live from Central Park on ABC’s Good Morning America. It’s been a phenomenal week for One Direction as they took home two awards at the 2013 American Music Awards including Best Pop/Rock Album and Best Pop/Rock Group and released their third studio album MIDNIGHT MEMORIES which immediately shot to #1 in 97 countries around the world. The 21-city tour, promoted by Live Nation and presented by Nabisco, the makers of OREO, RITZ and HONEY MAID, kicks off on August 1, 2014 in Toronto, ON at Rogers Centre and includes stops in New York, Chicago, Los Angeles, Boston, Dallas and Miami, amongst others. Additional dates to be announced. Tickets go on sale on December 7 at www.livenation.com.

“We simply can’t wait to be back in North America touring and to see our fans,” says Niall Horan. “It’s going to be absolutely huge!” Citi® is the official credit card of the WHERE WE ARE 2014 North American tour. Citi® cardmembers will have access to pre-sale tickets beginning Tuesday, November 26 through Citi’s Private Pass® Program. For complete pre-sale details visit www.citiprivatepass.com. Fans will have additional opportunities to purchase tickets early starting December 3 by signing up for a Facebook RSVP at (http://bit.ly/1DRSVP). Tickets go on sale Saturday, December 7. Additional details, including information on other pre-sales opportunities for fans, are available at www.livenation.com and through local venue websites.

Fans can catch a sneak peek of the boys as they gear up to perform on NBC?s Saturday Night Live on December 7, their second appearance on the show. You can also catch the boys performing at the iHeartRadio MIDNIGHT MEMORIES album release party airing on the CW on December 9, with a special encore airing on Christmas Day at 9 PM ET.

One Direction formed in 2010 and have since amassed a loyal fan base and fame all across the globe. It has been an incredible year for the boys, as they took home a BRIT Award, three Billboard Music Awards, six TEEN CHOICE Awards, three MTV EMAs, two 2013 American Music Awards and a moonman for Best Song Of The Summer at the 2013 MTV Video Music Awards. With two albums to date, UP ALL NIGHT and TAKE ME HOME, the boys have sold more than 35 million records worldwide and have achieved a total of 67 No. 1 songs. One Direction made their movie debut in 2013 with their global No. 1 box office hit 3D concert movie. 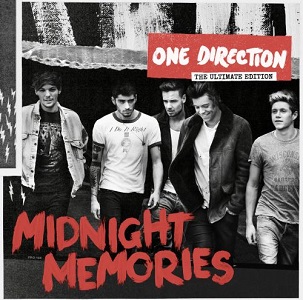 WHERE WE ARE 2014 NORTH AMERICAN TOUR DATES
All dates and venues below subject to change.
Additional dates to be announced.