John Lennon’s iconic 1971 album Imagine, featuring his famous plea for peace and unity that imagines “all the people sharing all the world,” is being celebrated and intimately explored with a comprehensive box set, Imagine – The Ultimate Collection, two acclaimed films – “Imagine” and “Gimme Some Truth” – and a lavish book titled “Imagine John Yoko,” personally compiled by Yoko Ono Lennon. The suite of releases coincide with what would have been the legendary artist’s 78th birthday on October 9th. 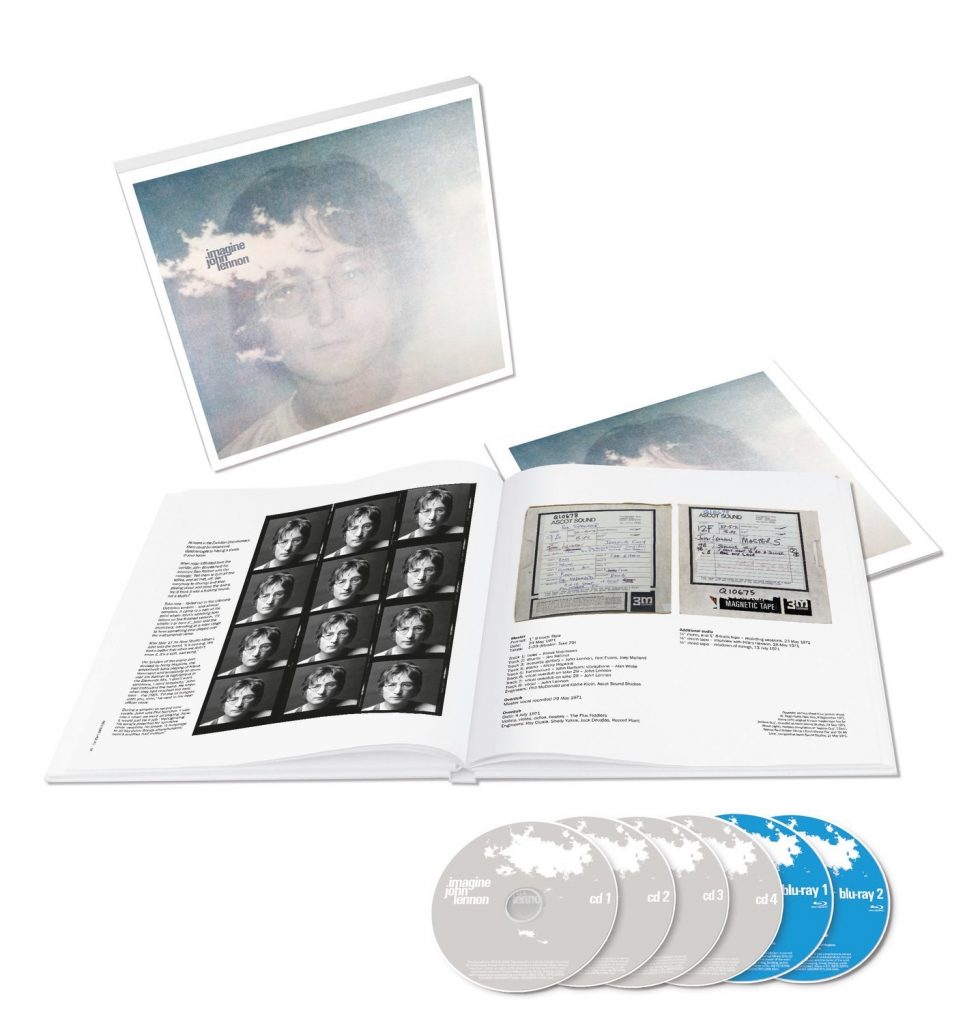 “Imagine was created with immense love and concern for the children of the world. I hope you enjoy it,” says Ono Lennon in the preface of the 120-page book that accompanies the box set.

Lennon’s indelible life and legacy will be honored with celebrations and events around the globe, both physically and virtually. On October 9, fans are invited to come together for the Imagine Global Listening Event to remember Lennon and listen to Imagine – The Ultimate Collection via Spotify with Yoko Ono Lennon and some of the many musicians, engineers, and filmmakers involved in the making of the iconic album and film. Fans will get a walk-through of what makes this collection so unique and be able to ask questions in real time to those who recorded the original album and the audio team that helped bring the box set to life.

SiriusXM’s The Beatles Channel (Ch. 18) will mark Lennon’s birthday with a weeklong mix of exclusive programming that will include specials, birthday mixes and more. The celebration kicks off today with an episode of “8 Songs a Week” featuring fans’ favorite Lennon songs, voted by the listeners, followed by a special two-part series on Imagine – The Ultimate Collection, featuring Bill Flanagan exploring the original masters, alternate versions and various mixes. The box set will also be the focus on the weekly live talk show Fab Fourum which will feature guests, Imagine engineer Shelly Yakus and engineer Rob Stevens, who oversaw the Raw Studio Mixes. The festivities will also include a “Magical Lennon Maxi Concert,” which will imagine the greatest Lennon concert you’ve never heard by playing a selection of Lennon hits and solo live, and comedian, television personality and former late-night talk show host, Dick Cavett will play some of his favorite Beatles and Lennon songs as a guest DJ and will share stories about his time spent with Lennon on and off the camera.

Lennon’s hometown will pay tribute to their famous son on his birthday with a special screening of the new restored and remastered “Imagine” and “Gimme Some Truth” films at The Museum of Liverpool. The event is free to the public and will also include a performance of tracks from Imagine – The Ultimate Collection. London’s famed Abbey Road Studios, where The Beatles famously recorded their groundbreaking albums and where much of the Imagine box set was mixed, will paint its iconic wall white with the message “imagine all the people living life in peace” and are encouraging fans to come write on the wall their messages for a better world.

This past Wednesday, the Grammy Museum in Los Angeles presented “An Evening With John Lennon’s Imagine – The Ultimate Collection,” which featured a riveting discussion about the making of Imaginewith original Plastic Ono Band member, Jim Keltner; director/producer of the GRAMMY® Award-winning making-of Imagine documentary “Gimme Some Truth,” Andrew Solt; DJ and longtime family friend of John and Yoko’s, Elliot Mintz; and Paul Hicks, the triple GRAMMY® Award-winning engineer who mixed several of the mixes on the box set.

Out today, Imagine – The Ultimate Collection (Geffen/UMe) is a historical, remixed and remastered 140-track six-disc box set fully authorized by Ono Lennon, who oversaw the production and creative direction. Spread across four CDs and two Blu-ray discs, this truly unique expanded edition offers a variety of listening experiences that are at once immersive and intimate, ranging from the brand new Ultimate Mixes of the iconic album, which reveal whole new levels of sonic depth, definition and clarity to these timeless songs, to the Raw Studio Mixes that allow listeners to hear Lennon and the Plastic Ono Band’s original, unadorned performances, to enveloping 5.1 surround sound mixes. This ultimate deep listening experience, which features scores of previously unheard demos, rare outtakes and isolated track elements, also includes The Evolution Mixes, a unique track-by-track audio montage that details the journey of each song from demo to master recording via instructions, rehearsals, recordings, multitrack exploration and studio chatter. Imagine is also available in a variety of physical and digital configurations, including as a 2CD Deluxe Edition, 1CD remaster, and 2LP 180-gram heavyweight black vinyl edition, as well as 2LP limited edition 180-gram clear vinyl. The digital Ultimate Collection includes all audio from the four CDs and the Deluxe and Standard also have digital equivalents.

This new edition takes listeners on an incredibly personal journey through the entire songwriting and recording process – from the very first writing and demo sessions at Lennon’s home studio at Tittenhurst Park through to the final co-production with Phil Spector – providing a remarkable testament of the lives of John & Yoko in their own words. The comprehensive nature of the full Imagine – The Ultimate Collection is the absolute best representation of a career artist working at the top of his creative game.

The original Imagine album has been faithfully remixed from the ground up the aforementioned Paul Hicks at Abbey Road Studios under the supervision of Yoko Ono Lennon. Hicks utilized high-definition 24-bit/96kHz audio transfers of the album’s original first-generation multitrack recordings for the task and the result is that the instruments and vocal now have a completely new level of clarity, especially when it comes to the surround sound mixes. As Hicks reveals in the book included in the Ultimate Collection, “Yoko was very keen that these Ultimate Mixes should achieve three things – to be totally faithful and respectful to the originals, be generally sonically clearer overall and should increase the clarity of John’s vocals. ‘It’s about John’ she said. And she was right. His voice brings the biggest emotional impact to the album.”

Offering a completely different and new listening experience, the Raw Studio Mixes place the listener in the center of Ascot Sound Studios with John Lennon and the Plastic Ono Band playing all around them, allowing them to experience the music just as it was recorded. Produced by Yoko Ono and mixed by engineer Rob Stevens, the tracks are devoid of effects – no reverb or echo, and sans strings – just live, unvarnished and raw. NPR Music recently gave a glimpse into these revelatory mixes with the release of the Raw Studio Mix of “How Do You Sleep (takes 5 & 6),” paired with an unreleased full performance video of the rare outtake they called “incredible.”

Also available today, Eagle Vision has released the acclaimed films “Imagine” and “Gimme Some Truth,” which details the making of Imagine, together for the first time, on DVD, Blu-ray and digital platforms. Under the supervision of Ono Lennon, these two films have been completely reassembled from the original 16 mm negative reels to HD and cleaned and digitally restored frame-by-frame. The “Imagine’ soundtrack has been completely remixed in 5.1 surround sound while the “Gimme Some Truth” soundtrack has been remastered. Both physical releases feature exclusive, never-before-seen extras including previously unheard “raw” studio mixes, and a fascinating insight into a photo shoot with David Bailey.

The original 1971 “Imagine” movie, directed by John & Yoko, was a groundbreaking film in the history of music video and rock cinema and is considered to be the first long-form music video. Its counterpart, the GRAMMY® Award-winning documentary “Gimme Some Truth,” directed and produced by Andrew Solt and edited from footage directed by John & Yoko, chronicles the creative process of how the Imagine album came into being, in turn providing a glimpse into Lennon’s creative genius and including many striking, special moments between John & Yoko. The progress of the making of the songs featured on the album is followed through from their inception to the final recording process with the film serving as a stunning, fly-on-the-wall document of how one of the most iconic and important albums of the rock era came into being.

On October 9, Thames & Hudson (UK) and Grand Central Publishing (US) will release Imagine John Yoko by John Lennon & Yoko Ono. Personally compiled and curated by Ono Lennon and packed with exclusive, previously unpublished material, Imagine John Yoko is the definitive inside story – told in revelatory detail – of the making of the legendary album and all that surrounded it: the locations, the creative team, the artworks, and the films, in the words of John & Yoko and the people who were there.

In 1971, John Lennon and Yoko Ono conceived and recorded the critically acclaimed Imagine at their Georgian country home, Tittenhurst Park, in Berkshire, England, and in the state-of-the-art studio they built in the grounds, as well as at the Record Plant in New York. The title track’s universally appealing lyrics were inspired by Ono Lennon’s “event scores” in her 1964 book Grapefruit, and she was officially co-credited as a writer on the track in June 2017. Upon release, the album went to #1 in six countries –  Australia, Japan, Netherlands, Norway, U.K. and U.S.

The best-selling single of Lennon’s solo career, the titular song was famously written as a plea for world peace. It remains one of the most legendary songs of all time and has earned numerous accolades. BMI designated it one of the top 100 most-performed songs of the 20th century, the Recording Academy inducted it into the GRAMMY® Hall of Fame and the Rock & Roll Hall of Fame inducted it into their 500 Songs that Shaped Rock and Roll. Additionally, the Guinness World Records British Hit Singles book named it the second best single of all time and Rolling Stone ranked it number three in their list of “The 500 Greatest Songs of All Time.” The song has been covered by everyone from Stevie Wonder, Elton John, Ray Charles, Madonna, Willie Nelson, Neil Young, Diana Ross, Herbie Hancock and Joan Baez.

John Lennon is one of the world’s most celebrated songwriters and performers of all time. Lennon has been posthumously honored with a Lifetime Achievement GRAMMY® Award and two special BRIT Awards for Outstanding Contribution to Music, and he has been inducted into the Rock and Roll Hall of Fame and the Songwriters Hall of Fame. In 2008, Rolling Stone ranked Lennon in the Top 5 of the magazine’s “100 Greatest Singers Of All Time” list. With a message as universal and pertinent today as it was when the album was created, Imagine secures John & Yoko’s collective place in cultural history.

CD 4 – The Evolution Documentary
New Mix in Mono 16-44.1
The story of each song on a journey from demo to master via instructions, rehearsals, recordings, multitrack exploration and studio chat

Blu-ray Disc 2 – In The Studio and Deeper Listening

The Raw Studio Mixes – Extended Album Versions – Live
New Mix in 5.1 & Stereo 24-96
Experience, in immersive Surround Sound, the moment John and The Plastic Ono Band record each song live, from a sonic soundstage at the center of Ascot Sound Studios at John & Yoko’s home in Tittenhurst

The Elements Mixes
From the Master Multitracks
New Mix in 5.1 & Stereo 24-96
Mixes from elements of the original multitracks that demonstrate some of the instrumentations from ‘behind the scenes’

The Evolution Documentary
New Mix in Mono 24-96
The story of the songs from demo to master in rehearsals, studio chat and mixed multitrack elements