British vocalist Sam Smith performs in Macau for the first time at MGM Theater of MGM COTAI on October 19 and 20, 2018. Guests will experience an up-close and personal concert with Sam Smith as he sings inside the intimate MGM Theater, which features premium seating for everyone to enjoy a front-row view to his performance. “The Thrill of It All” Asian leg of his tour sees Smith performing in Singapore, Manila, Seoul, Tokyo, Osaka, Macau, Shanghai, Beijing and Bangkok throughout the month of October. 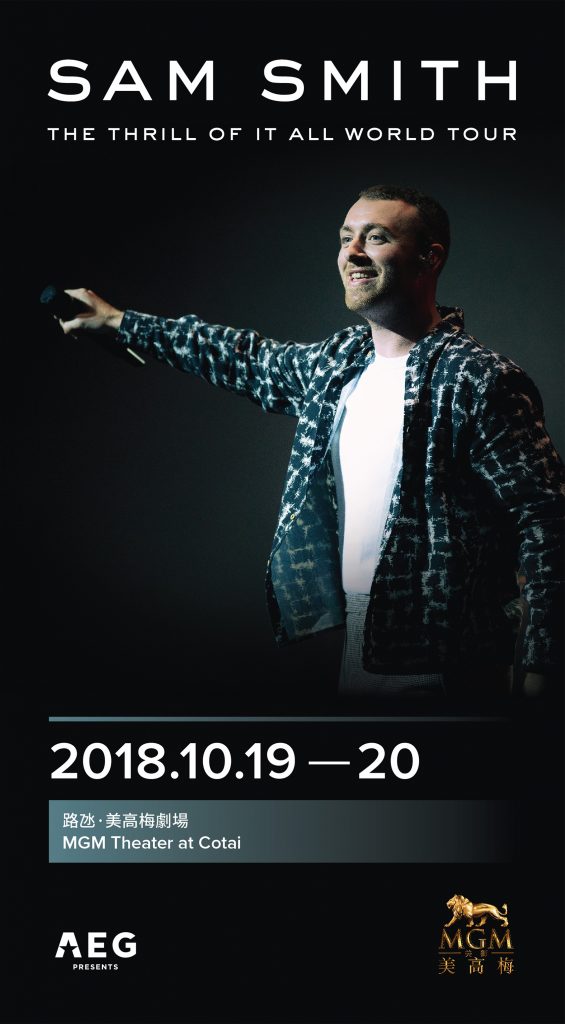 In October 2012, Smith catapulted to fame when he was featured on Disclosure’s single, “Latch”. Two years later, he released his debut studio album, In the Lonely Hour, featuring “Stay with Me” which went on to become an international sensation, reaching number one in the UK, the world is left in the grip of fever by selling over 14 million records worldwide. In 2015, Smith garnered many prestigious accolades, winning four Grammy Awards; a Golden Globe Award and an Academy award for the Spectre theme song, “Writing’s on the Wall”; two accolades from the 2015 Brit Awards and three awards from the 2015 Billboard Music Awards.

Smith comes to Macau after the recent release of his second studio album, The Thrill of It All. Since its release in November last year, it hit the top of the UK Albums Chart and the US Billboard 200. Alongside worldwide sales of over 4 million records, the album’s lead single, “Too Good at Goodbyes”, reached number one in the UK and Australia, and became Smith’s sixth UK number one single.

“We are honored to have Sam Smith perform for the very first time in Macau at our new MGM Theater at MGM COTAI,” Mr. Grant Bowie, Chief Executive Officer & Executive Director of MGM China Holdings Limited said. “We hope this will be a very personal experience for our guests, as Smith sings his soulful ballads in our theater which offers an intimate setting with exceptional acoustics.”

MGM Theater is Asia’s first dynamic theater designed by Sceno Plus, a leading performing arts and entertainment design firm. It is immersive, flexible and its agility allows the hosting of concerts, resident shows, corporate events and more. MGM Theater seats up to 2,000 people in more than 10 spectacular configurations. It is also the world’s first theater to feature a GALA revolving seating system in a 360-degree format surrounding stage. At a flick of a switch, this innovative seating system can be customized for the needs of any event, and within minutes, the theater can be transformed from an intimate dinner setting into a full-blown concert hall.