Kesha and Macklemore will team up in 2018 for ‘The Adventures of Kesha and Macklemore’ Tour. Presented by Live Nation, the tour follows acclaimed and celebrated eras for both artists. For Kesha, that has included her triumphant latest No. 1 album ‘Rainbow,’ a completely sold-out headlining tour, and two recent GRAMMY® nominations.  For Macklemore, ‘Gemini,’ his first solo effort in 12 years, debuted at No. 2 on The Billboard 200 chart, No. 1 on the charts for Rap, R&B/Hip-Hop and Independent Albums and includes Platinum-certified single  “Glorious” with the viral video that has been viewed over 95 million times. Macklemore also recently wrapped up a completely sold-out US tour. 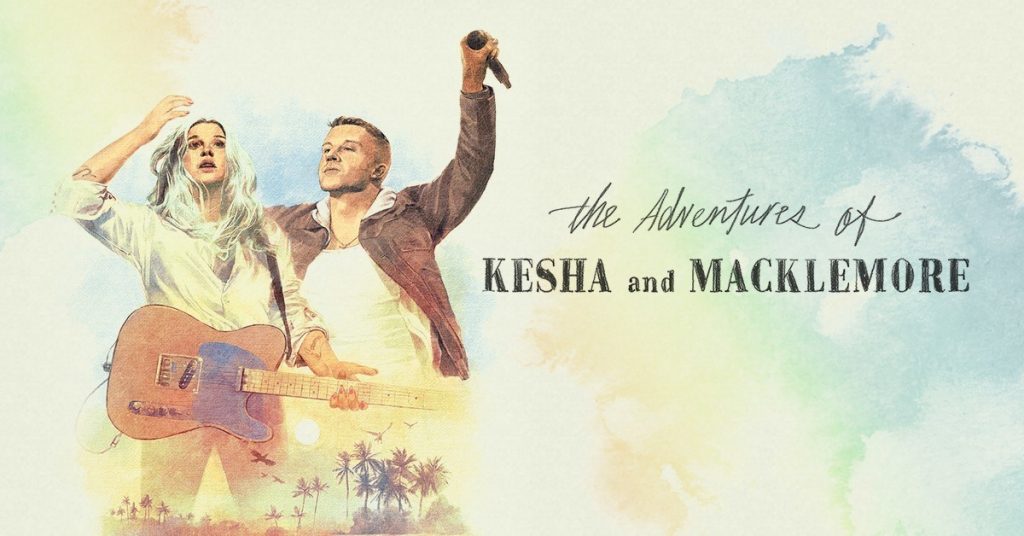 $1 from every ticket sold will be donated on ‘The Adventures of Kesha and Macklemore’ tour. Kesha will donate her proceeds to RAINN (Rape, Abuse, & Incest National Network), the largest anti-sexual assault organization in the US. Macklemore will donate his proceeds to M Plus1, and organization that advances racial and social justice through the M&RL Equity Fund.

Rolling Stone called one of Kesha’s recent live performances in Nashville “one of the most positively uplifting, inclusive concert experiences available in 2017.” Backed by a live band and with her trademark swagger and playful snarl, Kesha will perform a set of her past global hits, her showstopping current single “Praying,” and other songs from ‘Rainbow’ (Kemosabe Records/RCA Records), “an artistic feat” (Entertainment Weekly) for the singer, which debuted at No. 1 on The Billboard 200 and topped charts in nearly 30 markets worldwide.

Praised by New York Times, Billboard, Vanity Fair and more, as well as ranked #4 in Rolling Stone’s 50 Best Albums of 2017, ‘Rainbow’ earned Kesha the first GRAMMY nominations of her career, with ‘Rainbow’ up for Best Pop Vocal Album and “Praying” getting a nod for Best Pop Solo Performance.

Collectively, Macklemore’s music videos have been viewed over 2.7 billion times and he is one of only two rappers to have a Diamond-certified single. His breakthrough album ‘The Heist’ with producer partner Ryan Lewis earned the duo 4 GRAMMY awards, 5 MTV Awards, 2 American Music Awards and 1 BET Award. In 2016, Macklemore was featured in an MTV special with President Obama about the opioid epidemic in America and was the first US citizen ever to participate in the Presidential Weekly Address.

Kesha and Macklemore also appear together on “Good Old Days” from the rapper’s latest album, ‘Gemini’ (Bendo/Warner Bros.), the duo performed the song together on Ellen earlier this year and at KIIS-FM’s Jingle Ball last week.