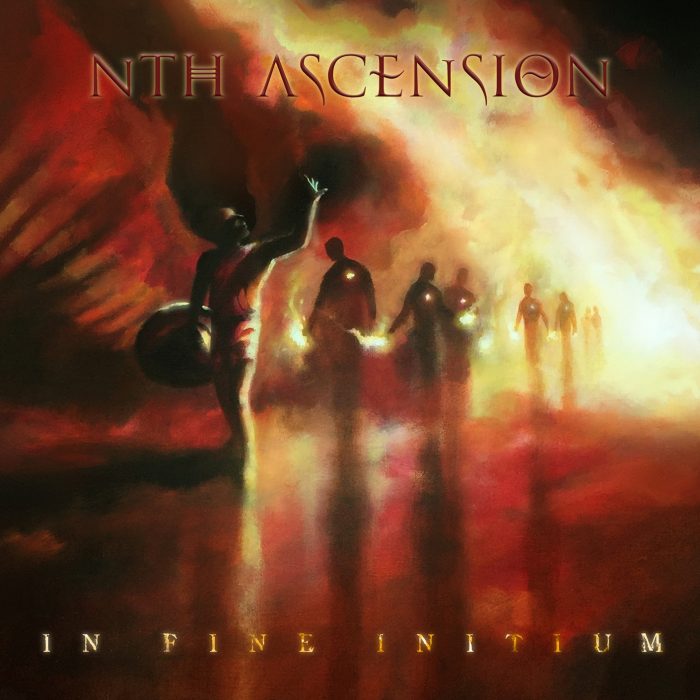 The British progrock band Nth Ascension was founded six years ago. What began as a four-men band has grown to five people. Bassist Gav(in) Walker was the last to join. This allowed Alan ‘Spud’ Taylor to focus entirely on the vocals. Keyboardist Darrell Treece-Birch is known from TEN and is also active as solo artist. End of 2014, they released their previous album ‘Ascension of Kings’. On this album are (among others) the tracks Clanaan pt I to III. ‘In fine initium’is the sequel to this. This album contains seven songs, including Clanaan pt VI to VII.
Especially the drums make a catchy start of ‘Kingdom Keys’. Alan sings with his recognizable voice lyrics that make you to think. Just like on their previous album, not the simplest lyrics. The backing vocals by drummer Craig Walker add value. The whole is nicely mixed in the speakers. Craig almost unnoticeably plays very quick and light on his cymbals. An electro-sound comes from the keys, but the strings prevent that it sounds too electronically. Gavin’s awesome staccato bass line is played quite low and cool. There are some high notes played with keyboard through this bassplay. The tight rhythm and the melodic elements are blending very well together. Good return to melody and lyrics from the beginning. This beautiful opening track of more than 15 minutes has a great build up to the end.

The mysterious start of ‘End of Days’ is partly obtained by the use of samples. Alan uses his voice slightly too theatrical. The music sounds a bit chaotic, but is in harmony with the lyrics. Again there is a cool bass groove, that alternates with high and bright-sounding music. Some twists are unexpected, others are almost unnoticed. Last but not least: there is also fine guitar work by Martin Walker. Especially in the last part of this song.

‘So, that was the Apocalypse’ has a drum intro with an up-tempo sequel. This sequel includes a large portion of retro rock, with catchy repetitions in rhythm and melody. Played live, the roof will tear off. Very cranckable instrumental track. The compelling combination between strings and keys makes Forever (Clanaan pt V) to a good instrumental song with a sublime finish.

‘When the rain falls (Clanaan Pt VI)’ obviously starts with the sound of rain. It is a fairly sober song. Again sounds of rain, now with thunder. It is clear that the end of this song, and thus the end of this this CD is approaching. I shortly hope for a twist, but alas. This last song is with 3:30 the shortest on the album.

‘In fine IInitium’ is -as previously stated- a sequel to ‘Ascension of Kings’. This story about ‘Clanaan is ll’ told now for only a quarter. For now, Nth Ascension still have enough inspiration. The lyrics are quite complicated. You won’t easily sing along with these large pieces of text. Both albums clearly belong together, but they are different enough.