Bands don’t come much smaller than Napier’s Bones, consisting as they do of two people. These are multi-instrumentalist Gordon Midgley and singer Nathan Jon Tillett. ‘Hell and High Water’ is a true D.I.Y. (Do it Yourself) album with singing, music, production and artwork (by Nathan) being handled by the band themselves. The CD itself has the appearance of a vinyl LP and the song list states Side 1 and Side 2, something which is to be heard in the arrangement. 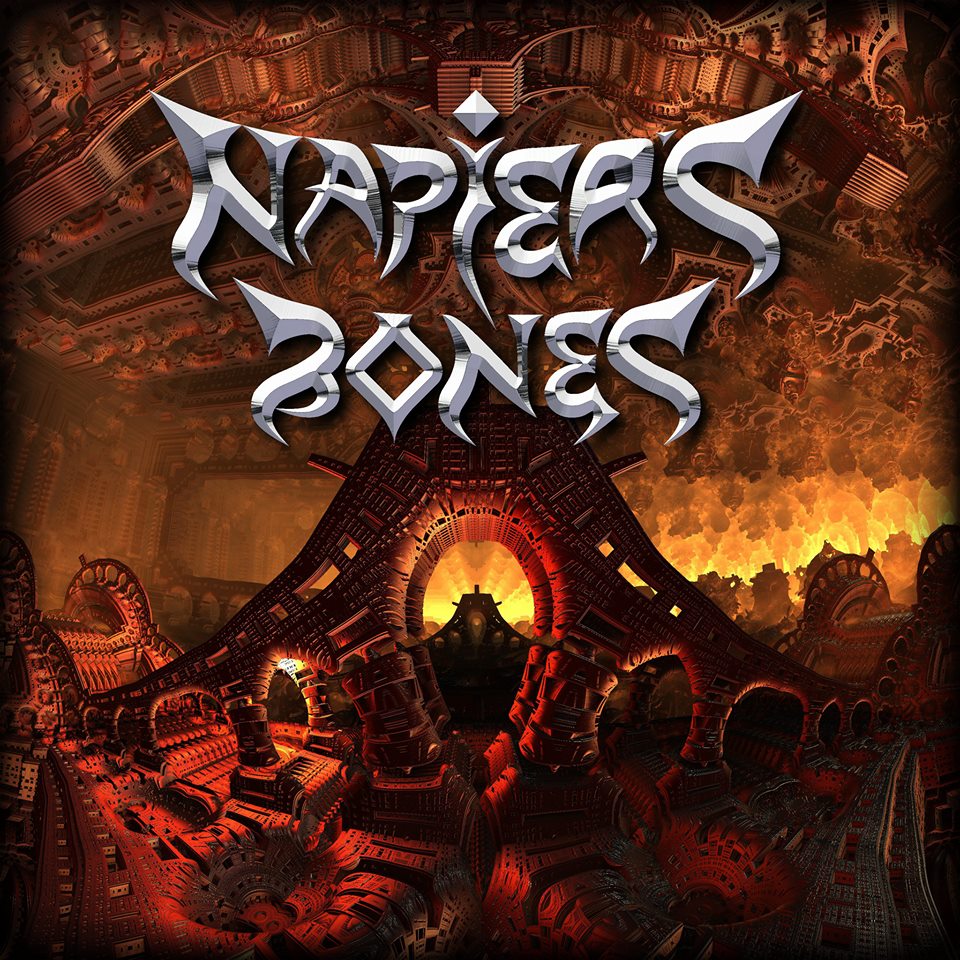 The instrumental intro to ‘An Air of Mystery’ opens with energetic drumwork and a positive contrast between the bass groove and high keyboard tones. Unfortunately the sound quality is not perfect, but it’s detailed enough to hear everything divided into sections. Nathan sings with light vibrato then there’s an interesting twist to a quieter middle section. Details return and it’s clear that this is the same song, with quite a complicated structure until the fade-out.

The next song, ‘Broadcasting Live’ is also complex in structure, managing to be enthralling and strange at the same time. The whole of Side 1 tells a story, one which is sung but also performed or acted-out in a dramatic way. The story and heavier music are difficult to describe in words, so it’s best for you to listen for yourself, which is possible through Bandcamp.

In ‘No Return?’ some of the keyboards are too high to sound comfortable but the instrumental intro is pleasingly long, with, at one point, choral singing being used as an instrument. Unfortunately, the sound quality is not always perfect. In the acoustic part Gordon takes the vocals, and during the more minimalist sections the sound is good. ‘No Return?’ has a complicated structure and the breaks in it are superb.

You can hear birds chirping and water lapping as ‘Mallerstang Morning’ begins. The sound quality is better, brighter. This is the “LP” Side 2. The music is clearly different: brighter and airier.

‘No Room at the Inn’ begins with the sound of a creaking door and the murmur of voices, setting the scene in a cafe. A minstrel begins to sing and play guitar. Soon, a discussion follows and he is chased away because he is a stranger. During a dramatic piece Nathan’s voice alternates between spirited defiance and sadness. Suddenly there is a twist to a sparse soundscape with a few tragic chords on the piano. The bass sounds low and gloomy and for a moment there seem to be a few lonely violin notes, a crying, whimpering sound.

All this, together with the lyrics combine to clearly portray the loneliness . You roll from one turn to another, because suddenly there is merriment as he is welcomed by poor farmers. This beautiful song lasts 13 minutes and then slowly dies away.

Gentle sounds of an acoustic guitar mark the start of ‘Awake in Yoredale’. Gordon’s backing vocals are a nice addition as parts of ‘Mallerstang Morning’ return. Finally, you can hear the whistling of birds and a man. It is clearly the end of the album and the 54 minutes flew by.

If the sound quality had been perfect, this would have been close to a top album. All the songs tend to finish with a fade-out and a composed finale would have been welcome. Give yourself time to delve into ‘Hell and High Water’ and listen intently. It’s not the most accessible album but is very beautiful and complex . If you want to buy the download you can do so through Bandcamp and ‘name your price’. (7.5 / 10) (Independent)