The Limiñanas, the duo from the home town of Perpignan is composed of Marie (drums) & Lionel (guitars, voice). It is doubtlessly one of the beautiful musical stories of the moment. “Malamore” is the 4th album of The Limiñanas, rooted in garage-punk but with the flair and range of an Italian movie soundtrack. 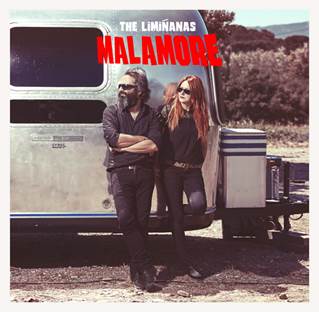 You will find the elements of the “sixties” (fuzz, wah-wah, organ Farfisa) harmoniously getting along in songs with a catchy concision. The lyrics, often in talk-over, are interpreted by Lio, Marie, but also Sarah Mc Coy, Nika Leeftlang and Guillaume Picard. The listener is involved in a strange French and English told narration with themes such as beaches, minimarkets, Italian cinema, a ruined and busted Greece among other things. Shifting from dramatic scene to scene, Malamore – just like The Limiñanas themselves – is a magnificently moody experience, music for the ears and the eyes, and quite unlike any other record you’ll hear in 2016.

This album features great collaborations such as Pascal Comelade and Peter Hook (Joy Division, New Order), who plays the bass on the already released track ‘Garden Of Love’.