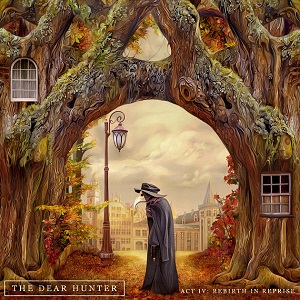 The new album from The Dear Hunter is out now. Act IV: Rebirth In Reprise, out now via Rude Records marks the long-awaited continuation of the band’s six album concept series chronicling the story of a boy at the turn of the century, only referred to as “The Dear Hunter.” The Dear Hunter is the main project of multi-instrumentalist, vocalist and songwriter Casey Crescenzo. From the beginning, it was a high-concept project: Casey mapped out multi-page treatments for a six-album story arc about the birth, life, and abrupt death of the boy. Act IV highlights the band’s cohesive growth as a group with Casey, Nick Crescenzo (drums, percussion), Robert Parr (guitar, keyboards), Nick Sollecito (bass), Maxwell Tousseau (guitar, keyboards) and Andrew Brown (keyboards). The Dear Hunter that fans have been experiencing and will experience on this tour.

The band previously shared four tracks from the album. The first released was “A Night On The Town” in both song and lyric video, which you can watch here. The second, “Waves,” premiered on Billboard who called the track “a majestic, lushly produced slab of orchestral rock music.” The third and fourth tracks released were “Wait” and “The Squeaky Wheel” respectively.