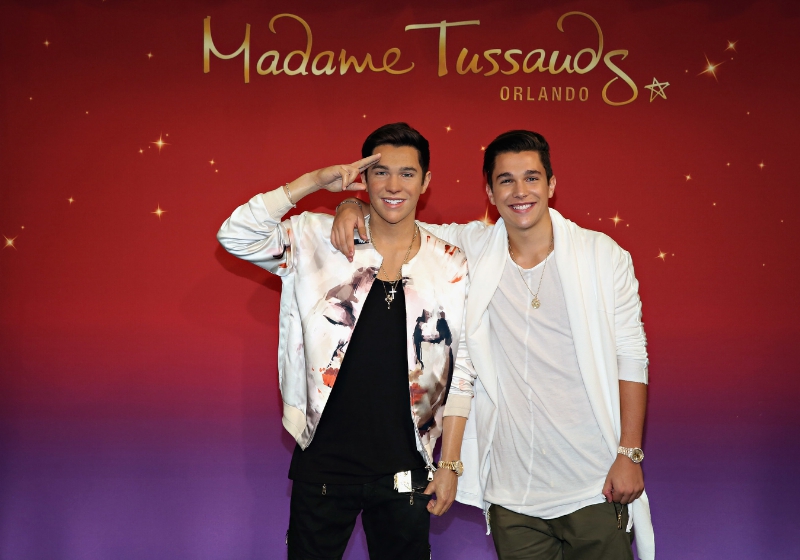 Teen sensation and pop music artist Austin Mahone has become the newest addition to the wax figure collection at Madame Tussauds Orlando on International Drive. Mahone unveiled his figure at the Madame Tussauds location in New York City on Aug. 11, 2015. The figure will now travel to Florida where it will be on display for fans inside the Orlando attraction’s music room.

The singer-songwriter met with Madame Tussauds artists earlier this year, where they took more than 300 measurements of his head and body to create his figure. Mahone worked closely with artists to finalize the figure’s pose that best reflected his look. The fashion-forward celebrity also donated his own clothing to put his signature stamp on the figure. No small detail was overlooked. The figure is even wearing a replica of the silver bracelet Mahone’s mother made him.

“Working with the Madame Tussauds team was definitely one of the coolest experiences I’ve had so far,” said Mahone prior to meeting his new figure. “I’m excited to finally see my figure and I can’t wait to share this figure with all the Mahomies, who can see it up close and personal in Orlando!”

The 19 year-old has become a worldwide teen sensation over the last few years with an active and growing fan base, known affectionately as “Mahomies.” Signing with Chase Records/Cash Money/Republic Records, Mahone has come a long way with his pop music career. His first EP, The Secret debuted in the top five on Billboard’s top 200 chart. Pitbull and Flo Rida have been featured artists on Mahone’s songs. Mahone has also opened for Taylor Swift’s RED tour. His most recent single, Dirty Work, debuted on July 2, 2015 and has garnered critical acclaim and one million video views in just one day.  Dirty Work is the lead single from his highly anticipated debut full-length album set for later this year.