Seminal New Orleans band Galactic will release their new album, Into the Deep, on July 17 via Provogue Records – part of the Mascot Label Group. The album is produced and arranged by band members Ben Ellman and Robert Mercurio and features collaborations with artists they’ve made connections with over the last 20 years – including Macy Gray, Mavis Staples, JJ Grey, Ryan Montbleau, David Shaw of The Revivalists, Maggie Koerner, Brushy One String and Charm Taylor. Currently on tour, Galactic is playing festivals across the USA including sold out shows in their hometown at 2015’s Jazz Fest, Hangout Music Festival, Electric Forest Festival, Wakarusa Music Festival, North Coast Music Festival, Jam Cruise and many more; a 4-night residency at Brooklyn Bowl in New York; and a performance at Red Rocks Amphitheatre. 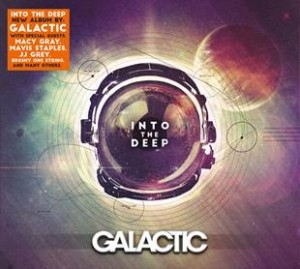 In their twentieth year of exploring the musical possibilities born out of their work together as Galactic, Ellman, Mercurio, Stanton Moore, Jeff Raines and Rich Vogel have created an album founded on elements of Galactic’s past, filtered through the lens of where they’re headed in 2015. On Into the Deep, the band draws inspiration from people and ideas that have long been close to the artists’ hearts and in turn, to the development of their sound. “We look for uniqueness and a quality that makes the people we collaborate with distinctively who they are,” Mercurio says of their collaborations on the album.

A key part of the creative spark comes from the teamwork of Ellman and Mercurio, whose ever-evolving production and arranging skills helped usher the band into a new phase of studio work beginning with Ruckus in 2007. A series of albums focused around specific concepts like Mardi Gras followed (From the Corner to the Block, Ya-Ka-May, Carnivale Electricos) as did collaborations with new guests hailing from worlds outside the one Galactic calls its own. “A lot’s changed in the songwriting and recording process,” explains Mercurio, “we don’t generally all get in a room and write a song collectively at this point…which I think has allowed everybody to compose ahead of time instead of composing improvisationally.”

“The fact that we can make our own records now, that was certainly not possible in the early days,” says Ellman, “pre-Katrina, we got our own rehearsal space and then we ended up getting our own ProTools rig…since then we’ve been making our own records.” Of producing Into the Deep, Ellman continues on to say, “we’re just always trying to increase our skills as producers and songwriters and arrangers by trying new things.”