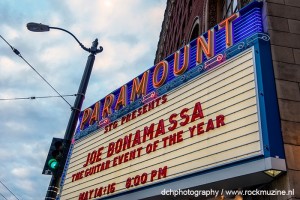 Friday, May 15th, 2015, B. B. King passed away … perhaps the best bluesman in the world… Friday, May 15 is also the date one of the most famous bluesmen in today’s scene, Joe Bonamassa, performed the second of three concerts at the beautiful Paramount Theatre in Seattle. The Paramount Theatre is one with history. On March 1, 1928, the building, designed by theatre architect B. Marcus Priteca, opened as Seattle Theatre. Paramount Pictures in Hollywood was the principal user to show their movies. In 1940 the name was changed to the present and it is used for performances. 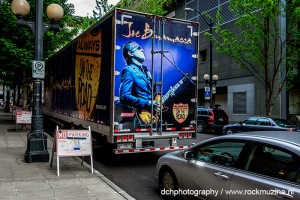 Seattle has musically produced a couple of things. First is Jimi Hendrix (who is buried here as well), also Heart, Queensryche and Duff McKagan (Guns ‘n Roses). In addition, of course, the grunge-scene with names like Nirvana, Pearl Jam, Soundgarden and Alice in Chains. 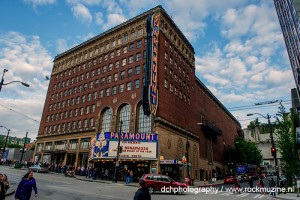 Also in the Paramount’s legacy are famous concerts by artists like Pink Floyd (22-10-1971), one of the first performances of Queensrÿche (30-06-1983) as opener for Zebra (you remember?) and of course Madonna’s Virgin Tour in 1985. Also some legendary recordings by the Guess Who, The Grateful Dead, Heart and Nirvana were recorded over here. On Interstate 90 from Seattle, we were stopped by the police because we drove 16 mph over the speed limit. A fine of $ 175 was the result. A star shaped chip in the windshield, and some damage to the bumper by a pot hole was enough to give us the blues in Seattle. 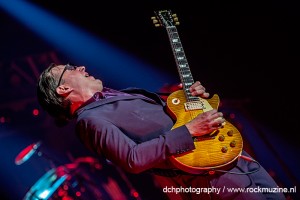 Joe Bonamassa, the great gentleman of contemporary blues scene who’s always on tour and releasing album after album, and DVD after DVD. His latest release is a tribute to the legends Muddy Waters and Howlin’ Wolf (CD / DVD: Muddy Wolf at Red Rocks). The 2,500 attendees at the Paramount just wondered weather there would be mention of B.B. King’s passing tonight. 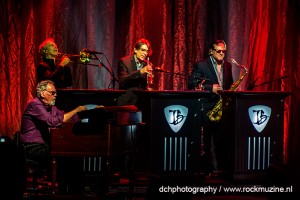 The concert opened with the applicable ‘Hey Baby’, by Seattle’s Jimi Hendrix and then ‘Oh beautiful’ in the same order also the last studio album ‘Different shades of blue’ from 2014. They played a total of 7 tracks from that album. They played 3 songs from the latest album ‘Muddy Wolf at Red Rocks’. We have already had 10 of the 16 songs. The rest of the set list were the hit-singles of his other albums. 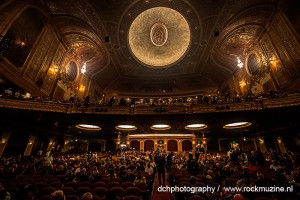 After the ninth song (‘Yonders Wall’) Joe introduced the band. It is the first time that is spoken by the audience. Joe didn’t announce the names of the songs and didn’t say “Thank you” at the applause. His guitar spoke though (mainly Gibsons). The next song ‘One less cross to bear’ was dedicated to BB King. The encore also was dedicated to B. B. King. Joe indicates that B.B. King is one of the two men that Joe owes his career to. 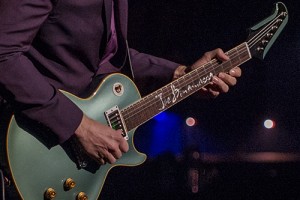 The room was beautiful, the sound perfect, and all the musicians who were playing could be heard in perfectly. The light was beautiful and the set was tuned to the last studio album, which is also promoted with this tour. What I missed was the live feeling. It was too clean. Especially with the (blues) rock Joe Bonamassa plays, the public should be able to participate. The public wanted this, calling catchwords and slogans about the blues and BB King. However, Joe Bonamassa and the band, didn’t want the audience to participate; They wanted to play perfectly and so they did. Too bad, otherwise this could have been an even more legendary concert. 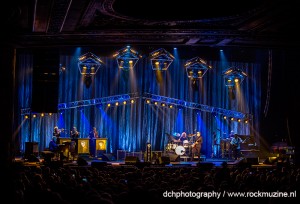 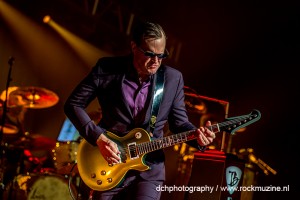 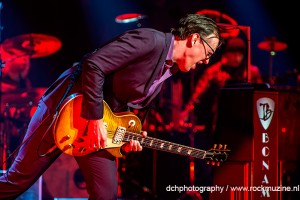 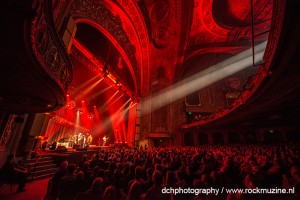