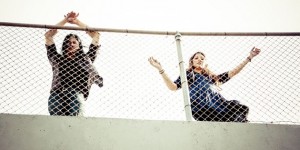 Mat Dauzat, guitarist, and Heather St. Marie, vocalist, met while in college together at Louisiana Tech University, then relocated from Louisiana to Los Angeles after graduation. Recently released EP “Falling Again” was produced by Dauzat and mixed by award-winning producer and mixer Ryan Greene at Validus Recording. It was mastered by Maor Appelbaum. Their music is both powerful and raw, focusing on vocals instead of instrumentation, and reveals the true chemistry of the duo. Dauzat St. Marie is armed with powerful songs and an intense live show featuring tight vocal harmonies that could only be achieved through a career of singing together. Definetly a performance you don’t want to miss.

The acoustic rock duo, Mat Dauzat and Heather St. Marie, better known as Dauzat St. Marie are returning to their Louisiana home state and will be performing at the following locations: