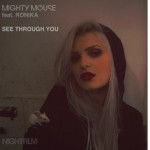 Mighty Mouse and Ronika have premiered a brand new collaboration, ‘See Through You’, which will be released on December 1 viaNightfilm. Uniting two fixtures of the Nu-Disco circuit, ‘See Through You’ is a glorious mix of strutting bass, squelching synths and arch strings, juxtaposed infectiously against Ronika’s address to someone who can “see right through” (thanks to 20/20 vision).

A producer, DJ, composer and one half Du Tonc, Mighty Mouse built his reputation making disco edits and remixing the likes of Gorillaz and Gill Scott Heron, before releasing his critically acclaimed ‘Disco Circus’ compilation across four instalments (Mixmag named the first two in their Top 10 Comps of the Year). Expanding his love of disco he incorporated house and techno into his original productions that regularly top the Hype Machine – including ‘In Front Of Our Friends’ with Monarchy. 2013 saw Mighty Mouse tour Australia, USA, Europe and start up Nightfilm: a record label and club night based at Edinburgh’s infamous Cabaret Voltaire, with guests including Lindstrom, Horsemeat Disco, Alex Metric, Yuksek, Mylo and Grum. Having met Ronika in such DJ and production circles, ‘See Through You’ is the latest release to be lifted from Nightfilm.

Ronika, meanwhile, is a singer, producer, DJ and video maker originally from Nottingham, before relocating to Barcelona and London. Whilst working as a sound engineer and DJ’ing in various venues around Notts, she began making music inspired by the likes of Egyptian Lover and Afrika Bambaataa. Assimilating a crate-digging love of disco, hip-hop, house and R&B into her effortless grasp of modern pop, Ronika’s debut album, ‘Selectadisc’, was named after Nottingham’s iconic, now-closed independent record store of the same name. It was released this summer to extensive praise (“a triumph”, Mojo ****; “it’s not clear whether Ronika knows how good she is” Fact, ****): a brand new single, ‘Marathon’, is also released in December, when Ronika will also open for The Human League across an extensive UK tour.