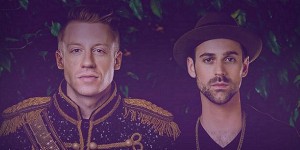 One of the biggest weekends in running this year just got bigger, Macklemore & Ryan Lewis will headline next month’s Rock ‘n’ Roll Las Vegas Marathon & ½ Marathon to benefit the Crohn’s & Colitis Foundation of America. The Grammy Award winners will perform on Sunday, November 16 during the pre-race concert which begins at 3:00pm. The marathon and half-marathon start at 4:30pm, running on both sides of the Las Vegas Strip at night. All new in 2014, Rock ‘n’ Roll Las Vegas returns the weekend of November 14-16 as the only running event to be illuminated by the neon lights on the Las Vegas Strip. Featuring the must-see Vegas sights from the iconic ‘Welcome to Las Vegas’ sign to the Fountains of Bellagio, the marathon and half-marathon route finishes at the base of the Mirage Volcano.

The unique course and nighttime race attracts runners of all abilities to experience the one-of-a-kind event with live bands at every mile, a Run-Thru Wedding for couples to elope on-the-go, the infamous group of Running Elvi, along with pre- and post-event parties throughout the weekend at Vegas’ top nightlife venues. “Macklemore & Ryan Lewis are two of the most popular and innovative performers in music today,” said Josh Furlow, Executive Vice President of the Rock ‘n’ Roll Marathon Series. “There is no event that can match the excitement and energy of running down the Las Vegas Strip at night. To have Macklemore take over the main stage to get the running party started, it’s sure to be an unforgettable event runners won’t want to miss.”

Known for their party anthems “Thrift Shop” and “Can’t Hold Us,” Macklemore & Ryan Lewis were the first duo in Billboard chart history to have their first two singles both reach number one. The pair was nominated for seven Grammy Awards this year and won four – Best New Artist, Best Rap Album for their debut studio album The Heist, Best Rap Song and Best Rap Performance for “Thrift Shop.”

New in 2014, runners have the option of purchasing a VIP package to add to the ultimate Las Vegas experience. Billboard chart-topper Aloe Blacc will kickoff race weekend with an exclusive performance at the VIP welcome reception on Friday night. VIP packages provide options for runners to gain exclusive marathon access throughout the weekend, including perks such as private packet pick up at the Expo, Start and Finish Line VIP hospitality, upgraded refreshments and more.