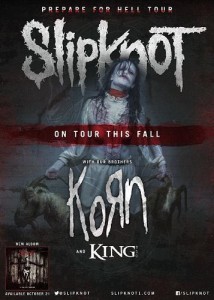 Global rock juggernauts Slipknot have announced the next phase of their uncompromising history -– the release of .5: The Gray Chapter – the fifth studio album from the GRAMMY AWARD®-winning group – arrives on October 21, while their North American Prepare For Hell tour is set to kick off immediately following the band’s previously announced Knotfest (October 24 – 26).

.5: The Gray Chapter is available now for pre-order, with all pre-orders receiving instant downloads of the album’s powerful new song “The Devil In I” as well as “The Negative One.” .5: The Gray Chapter is also available in a wide range of distinctive versions, including standard and special edition CDs (2 bonus tracks and expanded packaging) as well as limited edition, colored vinyl double LP set.

Slipknot unleashed “The Negative One” earlier this month, marking the groundbreaking band’s first new music in more than six years. The song immediately hit #1 on Billboard’s Trending 140 chart, with the band and track both quickly becoming trending topics on Twitter globally and in the US. The track is currently sitting atop the metal singles chart for its third straight week and counting. Meanwhile its nightmarish companion video – directed by the band’s M. Shawn Crahan (Clown) – has quickly drawn more than 2 million individual views at Slipknot’s official YouTube channel.

“We’ve been waiting a long time for this,” stated Slipknot’s Corey Taylor. “Not only do we get to tour with friends who we respect, we’ve also chosen a band that represents the fury of the future. Slipknot is coming to your town. And hell’s coming with us.”

The nationwide run will see Slipknot coming hot off the heels of their US live return at their own KNOTFEST, with two unique sets at their very own three-day metal and heavy music destination festival slated for October 24 through 26 at San Bernardino, California’s San Manuel Amphitheater & Campgrounds. Powered by Rockstar Energy Drink and curated by Slipknot themselves, KNOTFEST will see Slipknot headline the Main Stage on both Saturday, October 25 and Sunday, October 26, offering fans a taste of the upcoming album with a unique concert experience each night. KNOTFEST will feature over 60 bands – including Danzig, Five Finger Death Punch, Volbeat, Anthrax, Killswitch Engage, Tech N9ne, Of Mice & Men, Black Label Society, Testament, Hatebreed, Atreyu, In This Moment, Carcass, and many others – performing on five stages on Saturday and Sunday, as well as a Friday Night VIP Pre-Party Bash (featuring Slipknot’s DJ Sid), band performances and other activities for those that purchase VIP or Camping Packages. A truly immersive experience, KNOTFEST attendees will descend into an apocalyptic underworld featuring over 20 attractions including a Slipknot Museum, carnival rides, a zip line across the festival grounds, drum circles, pillars of fire, freaks, fire-breathers, stilt-walkers, and much more.