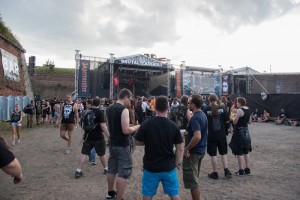 A large four-day festival in an ancient fortress located in the Czech Republic. With big names like Slayer, Children of Bodom, Amon Amarth, Bring Me The Horizon and Hail Of Bullets. In our opinion, it sounded like a nice festival allready before it even started. The festival began on Wednesday, August 6th around 3 o’clock in the afternoon. The first band, Suburban Terrorist, played at half 4, however, not many have heared much of it, as everyone was too busy to get a camping spot close to the festival. Outside the festival grounds, so outside the fortress, you heared pretty much nothing of the sound, something that was nice for the village where the festival was located. After the tents were set up and everyone has bought beer at the local supermarkets, it was time to head for the fort. After a security check, we were finally inside the walls of the impressive fortress. Time for the coins to change against tokens. 1 token was converted to Euros €1.12, so cheap! Alcohol was also the cheapest, a pint of beer was only one token and a can of coke (except for water, the only non alcoholic beverage) was 1.5 coins. How mad! 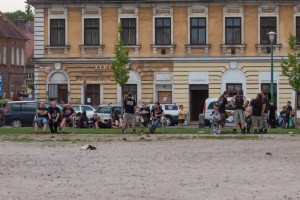 After a short night, at 10.30 AM our next band (Panychida) was ready to play; Slayer and Children of Bodom played that day in the evening. Many bands that you knew they all sounded good through the MP3, sounded even better in real life, such as Havok, who played this really sweltering day. We stood in the sun to burn away, but what a feast it was. It’s always nice to see a huge crowd headbanging, so you could be sure that the music was well-liked in the early morning. Outside the fortress it seemed as if the long-haired rig had taken over the city and everywhere you looked you saw metalheads. At supermarket number one, supermarket number two, in the village behind the fortress, anywhere… Outside the fort was a super-cozy atmosphere as well. Lots of stalls selling food and drinks, great music, and lots of beer. 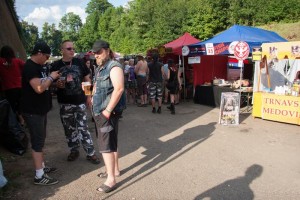 Most people that day were waiting for Slayer, the band following Bring Me The Horizon on stage. During the operations of Bring Me The Horizon continuously “SLAYER!” was recalled. After waiting of over an hour, finally began Slayer; which still is a great band! In the end, of course, a tribute to the last deceased band member of Slayer, Jeff Hanneman, who died cos of a spiders bite.

When Slayer was over, it was time for Children Of Bodom. The two stages were build next to eachothers, so the audience only had to move tens of meters to the left. Children Of Bodom was enormously energetic, the band only two or three songs to skip, cos of the delayed curfew of Slayer, Children Of Bodom played less time. Luckily, they played the song ‘Are you dead yet’, where the audience went totally crazy. Middle fingers in the air, where Alexi (the guitarist and singer of the band) was asking for. 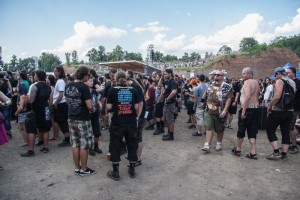 After a slightly longer night than the day before, it was the third day we were waiting for Amon Amarth. It still amazed us that we haven’t seen that many drunk people, since everyone by guzzling beer all day here (because it was the cheapest after all). And every day started with a long procession to the kind of large supermarket 1.5 km away. In the field meanwhile the merchendise of Brutal Assault 19 was virtually sold out. A few sizes and a few shirts were still available. Having seen a lot of mosh pits at many beautiful live performances, we were amazed by the one of Amon Amarth. The band made a great show of their performance and you actually had to watch out for the moshpit; it was getting bigger and bigger untill the end. Furthermore, in the fort the stalls had to take it easy during Amon Amarth, and it seemed as if the whole fortress stood by watching. Today was a long day, because the last band was onstage around half past four. And at the tents the spectacle went on for hours. 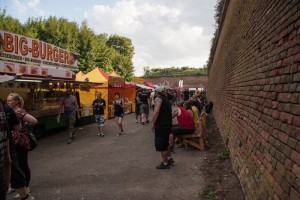 The fourth day was the first band allready started around 10.30. It was so quiet in the fort at that time, everyone was still asleep or doing errands. Yes, the supermarkets did have the time of their lives with such a festival in the area.

The last day everyone was going a bit easier, a lot happened whatsoever outside the fortress. In the village behind the fort, near the benches in the grass there were some. Many were simply in the tents and others were in the fort in a specially constructed hall with lots of tables and benches for some rest and some food. You could see that everyone was broken and this really was the day doing nothing, but lay down and sleep. In fact, most had to wait for the last great band of the festival, Hail Of Bullets, who only began around 1 am!

Hail Of Bullets finally went onstage. We were pretty tired, hardly slept for 3 days and just partied on and on. But all the energy was collected quite loose / broken to go on Hail Of Bullets. After Hail Of Bullets, who were really great, it was for the most of all time to return to the tents, to have a drink and listen to music, and to go to sleep. The tents was indended to leave before 9 AM, all cleaned up that morning, which was of course not succeeded by many. We have really enjoyed it, and many metalheads with us. Brutal Assault is a great and cheap festival (4 days including camping was only €80,-) We can’t wait for the next edition of the Brutal Assault. Number 20, that should be promising !! 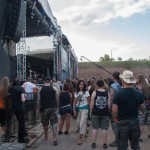 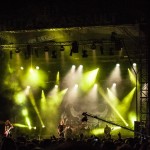 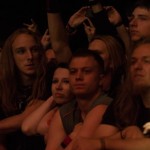