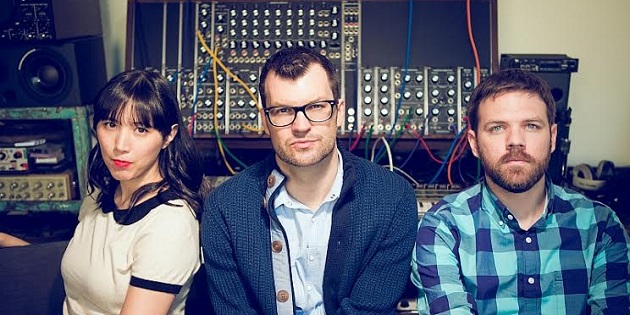 Electro-synth trio Faded Paper Figures (FPF) release their fourth studio album, “Relics”, on August 5 via Shorthand Records and upfront on bandcamp the cinematic synth supernova, “Breathing”. The album opener was written and recorded on almost exclusively analog synths. “We love the richness and warmth it adds to the song,” notes vocalist and guitarist R. John Williams.

Faded Paper Figures have got rebirth on the mind in “Breathing”. “The lyrics are an attempt to make sense of life and death, old-Egypt style,” guitarist and vocalist John Williams explains. “We all die, so what happens then?” A tough question, but an appropriate one for Williams, who is a professor of English at Yale, and vocalist and keyboard player Heather Alden, who is in residency after completing medical school. Now the track pulls Egyptian mythology into the future with its kaleidoscope of cascading synths.

The rebirth theme is sort of a coincidence, he says, seeing as they had to pull off some resurrection magic on Kael Alden’s rig. “We spent quite a chunk of money to get Kael’s Roland Jupiter-4 working again. It involved corresponding online with some potentially sketchy characters somewhere in Eastern Europe, but they turned out to be enormously helpful.”