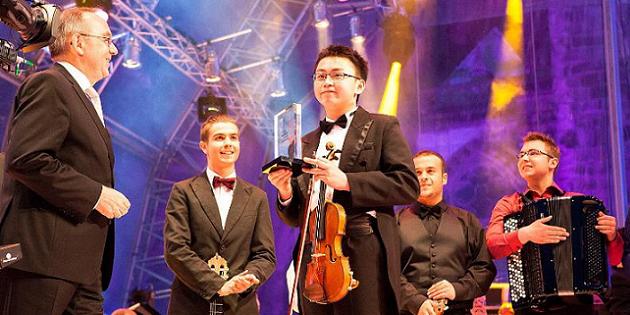 15-year-old violinist Ziyu He, from Austria, has been named the winner of Eurovision Young Musicians 2014. The final of this prestigious competition took place on Saturday 31 May at the Roncalliplatz in Cologne, Germany. The show was broadcast in 10 of the 14 participating countries by EBU Members; WDR (Germany), CT (Czech Republic), NERIT (Greece), PBS (Malta), TRM (Moldova), NRK (Norway), TVP (Poland), MTVA (Hungary) and SVT (Sweden). The whole show or an edited version will be broadcast by other participating Members over the next few weeks.

The 14 finalists performed in front of an audience of around 2,000 people outside Cologne’s iconic Cathedral and were judged by a panel of five world-renowned musicians; Chairman of the Vienna Philharmonic Orchestra Prof. Dr Clemens Hellsberg, conductor Uros Lajovic, recordist Maurice Steger, clarinettist Carol McGonnell and the first Eurovision Young Musicians winner in 1982, pianist Markus Pawlik.

Austrian winner Ziyu He performed Béla Bartók’s Violin Concerto No. 2, 1st mvt. candenza. He was born in 1999 in Qingdao, China and began studying the violin at the age of five. Ziyu has lived and studied in Salzburg at the Leopold Mozart Institute of the Mozarteum University since October 2011. Ziyu said, “I am very happy to have taken part in this great competition and to have won.”

The winner received a prize of 10,000 euros and the opportunity to perform with the Vienna Philharmonic Orchestra. Prizes were also awarded for the first time to second and third placed Urban Stanic from Slovenia and Gergely Devich from Hungary who were awarded 7,000 and 3,000 euros respectively. Earlier this month, Austria also won the 59th Eurovision Song Contest, organised by the EBU, in Copenhagen.

Eurovision Young Musicians is the EBU’s leading contest for young classical musicians and, since its first outing in 1982, has established an enviable reputation for finding outstanding new talent. The first Eurovision Young Musicians (EYM) was held in Manchester (UK) on 11 June 1982. Since then it has been held six times in Vienna (Austria), twice in Switzerland (Geneva and Lucerne), and once in Copenhagen (Denmark), Amsterdam (Netherlands), Brussels (Belgium), Warsaw (Poland), Lisbon (Portugal), Bergen (Norway) and Berlin (Germany). Previous winners of the contest include leading virtuosos Markus Pawlik, Julian Rachlin, Natalie Clein, Julia Fischer and Lidia Baich.