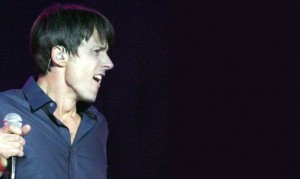 The CD Singles box set will feature nearly every Suede b-side across all previous formats of each single, including a number of hard to find tracks that were omitted from the 2011 reissues (‘Digging A Hole’ (Neil Codling vocals), ‘Rent’ (feat. Neil Tennant, live at the Roundhouse, December 1995), ‘Saturday Night’ (feat. Neil Tennant, live at the Roundhouse, December 1995), ‘Down’ (demo), ‘Obsessions’ (radio edit), ‘Weight Of The World’ (Neil Codling vocals) and ‘Saturday Night’ (original demo). The box also includes for the first time CD singles of the three ‘Bloodsports’ era singles and B-sides from 2013.

The 7″ Singles box will feature reproductions of the 11 x 7″ singles the band have previously released, along with for the first time on the format 13 x 7″ singles, with B-sides personally selected by Brett Anderson.

The first 250 pre-orders on either box set will be treated to an exclusive Suede print of the lyrics to ‘Trash’ signed by Brett Anderson, which fans can also have their name added too.

Suede will close this year’s series of Teenage Cancer Trust shows at The Royal Albert Hall on March 30. The band will perform their hugely acclaimed second album Dog Man Star to celebrate the 20th anniversary of its release. The lauded album, which was also re-released in 2011, is often regarded as the band’s masterpiece, cementing their influence as the pioneers of Britpop. Suede credit their performance for Teenage Cancer Trust in 2010 with getting the band back together. Brett Anderson said, “It’s great being involved with Teenage Cancer Trust again. It’s a fantastic charity and we have a proud history of involvement with them. The gig we did for them at the Royal Albert Hall in 2010 was possibly my favourite ever show in 25 years of playing live.”