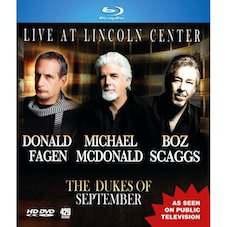 The Dukes of September a super group comprised of pop/rock/R&B icons Donald Fagen (Steely Dan), Michael McDonald (Doobie Brothers) and Boz Scaggs release Live on DVD and Blu Ray to coincide with its PBS debut airing on Great Performances From Lincoln Center. The DVD will be released March 18.

Filmed in November of 2012, The Dukes of September features the Dukes of Septembers dynamic rock and soul revue with not only showcasing their well-known hits such as Reelin in the Years, Lido Shuffle and Takin it to the Streets , but also forays into rock and R&B gems such as Sweet Soul Music and Love T.K.O.