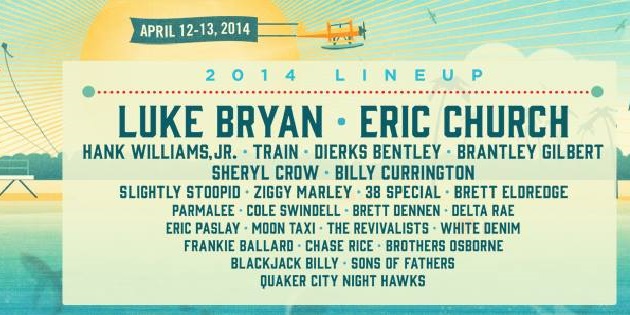 Rock The Ocean’s Tortuga Music Festival is proud to announce the addition of more top performers to its already star-studded second year lineup. Joining headliners Luke Bryan and Eric Church will be Hank Williams Jr. , Dierks Bentley , Brantley Gilbert , 38 Special , Parmalee and Eric Paslay . The festival returns to the sands of Fort Lauderdale Beach Park in Florida on April 12 th and 13th. Tickets are on sale now at www.tortugamusicfestival.com.

“We said when we announced our initial lineup that we were looking to build on the talent of our amazing first year and raise the bar even higher,” says HUKA Entertainment co-founder and CEO A.J. Niland. “With the addition of these six incredible artists to the bill, we have undoubtedly assembled one of the most singular and exciting musical events of 2014.”

Tortuga Music Festival partner CMT, which is already providing content and contests across its television, internet, social and radio network platforms, has confirmed it will host its popular “Hot 20 Countdown” program from the festival site this year, capturing performances and artist interviews with exclusive coverage of the two-day festival with country’s biggest superstars.

Produced and promoted by HUKA Entertainment and created with the Rock the Ocean Foundation, Tortuga Music Festival serves to celebrate its oceanfront setting while raising awareness of issues impacting the world’s oceans and generating support for marine research and conservation. This year’s festival will once again include a one-of-a-kind Conservation Village on site, with nearly two dozen organizations and exhibitions providing attendees with information and tools to help protect the world’s oceans and marine resources.

“Most people have no idea how bad the condition of our oceans are,” says Rock The Ocean founder Chris Stacey. “We’re excited to be part of a live entertainment event that everyone can enjoy, but we do so in observance of the important message we are committed to. Reefs, sharks, turtles and many more are all in danger, and it’s only in respecting and conserving our natural resources that we can continue events like these for years to come.”