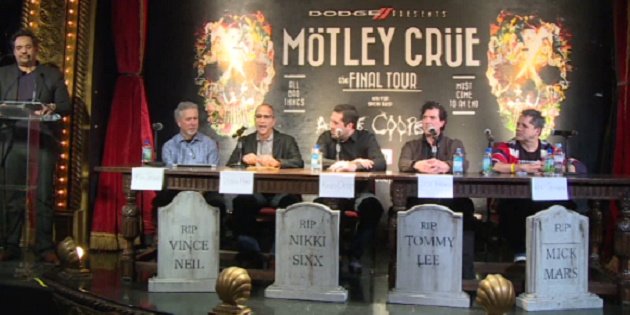 After more than three decades together, iconic rock ‘n roll band MÖTLEY CRÜE announced today their Final Tour and the band’s ultimate retirement. The announcement was solidified when the band signed a formal Cessation Of Touring Agreement, effective at the end of 2015, in front of global media in Los Angeles.

With over 80 million albums sold, MÖTLEY CRÜE has sold out countless tours across the globe and spawned more than 2,500 MÖTLEY CRÜE branded items sold in over 30 countries. MÖTLEY CRÜE has proven they know how to make a lasting impression and this tour will be no different; Fans can expect to hear the catalogue of their chart- topping hits and look forward to mind-blowing, unparalleled live production. “When it comes to putting together a new show we always push the envelope and that’s part of Motley Crue’s legacy,” explains Nikki Sixx (bass). “As far as letting on to what we’re doing, that would be like finding out what you’re getting for Christmas before you open the presents. We think in an age of too much information, we’d like to keep some surprises close to our chest until we launch the Final Tour.”