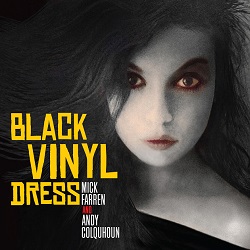 Much to the excitement of fans and music press around the world, the final album by UK music legend, activist, anarchist, writer and street politician, Mick Farren, has been released. Mick Farren and Andy Colquhoun ‘The Woman In The Black Vinyl Dress’ is now available on CD from GONZO Multimedia UK. Mick Farren was an English journalist, author and singer associated with the UK underground. Farren was best known as the singer with the proto-punk group The Deviants between 1967 and 1969. The band released three critically acclaimed albums “Ptoofff!”, “Disposable” and “The Deviants 3”, before Farren left for a solo career. In 1970 he released his first solo album ‘Mona – The Carnivorous Circus’ which featured Steve Peregrin Took, John Gustafson and Paul Buckmaster, before leaving the music business to concentrate in his writing.

During the mid-70s Mick briefly returned to music, releasing the single “Play With Fire” featuring Marky (soon-to-be Ramone) Bell, Jon Tiven and Doug Snyder. He also released the EP ‘Screwed Up’, the album ‘Vampires Stole My Lunch Money’ and the single “Broken Statue”. The album featured fellow NME journalist Chrissie Hynde (The Pretenders) and Dr. Feelgood guitarist Wilko Johnson. After that, Farren did sporadic musical work, collaborating with Wayne Kramer of the MC5 on two albums (‘Who Shot The Dutch’ & ‘Death Tongue’), Jack Lancaster of Bloodwyn Pig on an album (‘The Deathray Tapes’) and Andy Colquhoun on The Deviants albums ‘Eating Jello With A Heated Fork’ and ‘Dr. Crow’. He also wrote lyrics for various musician friends over the years. He co-wrote “Lost Johnny” with Lemmy for Hawkwind, and “Keep Us On The Road” and “Damage Case” for Motorhead. He co-wrote “When’s The Fun Begin?” with Larry Wallis for the Pink Fairies, along with several songs on Wallis’s solo album ‘Death In The Guitafternoon’. Mick also provided lyrics for the Wayne Kramer single “Get Some” in the mid-1970s and continued to collaborate with him in the 1990’s.

As a writer, in the early 1970’s Mick contributed to the UK Underground press. He later wrote for the mainstream publication NME. Farren also penned 23 novels, which included 11 works of non-fiction, several biographical (including 4 books on Elvis Presley), autobiographical and culture books, as well a lot of poetry. From 2003 to 2008 he was a columnist for the Los Angeles newspaper CityBeat. In 2010 Mick returned to the UK and continued to write. As a longtime asthmatic, Farren eventually developed emphysema, and against medical advice Farren continued to perform on occasion with The Deviants, (with the use of an oxygen tank between songs at times).

“I’m a lousy singer,” he once told the LA Weekly, “but an excellent rock star.”Mick Farren lived his music to the very end… He died at the age of 69 on July 27, 2013, after collapsing on stage while performing with the Deviants at The Borderline club in Soho. A tribute concert to Mick Farren will be held on November 14, 2013 at The Flyover in London. Says Jon Downes of The Gonzo Daily blog, “Following Mick’s funeral last month, it was decided to hold a much bigger occasion where friends and colleagues could gather together, share stories, laugh and reflect on the life of a friend who left us too soon. At its heart, this event will be an opportunity to finish the set Mick and The Deviants started that fateful night at The Borderline. There will be live music from the Deviants, Slim Tim Rundall, and guests. I had great love and respect for him, and I hope in the weeks, months and years to come, as part of Gonzo Multimedia we shall help bring his invaluable work and inspirational legacy to new generations.”

Mick’s final album, with fellow Deviants member and musical accomplice Andy Colquhoun, ‘The Woman In The Black Vinyl Dress’ was recorded last year and serves as a fitting swansong for the legendary artist. Says Andy, “The initial vocal tracks were laid down by Mick in February 2012 at Brighton Electric, to click tracks at various tempos. Jaki Miles-Windmill added backing vocals, and some percussion at this session. I took the vocal tracks to my studio, Cybermusik, and overdubbed guitars, bass, drums, keyboards and more backing vocals, and also put the poetry in a song structure. The tracks ‘Pick Up The Scissors’ and ‘Tomorrow Never Knows’ had vocals recorded at Mick’s flat and at Cybermusik. Jaki also added percussion and vocals at Cybermusik.” Andy put the the CD together over a six month period, and mixed the album in August 2012. Andy also produced/played/composed on ‘Vampires Stole My Lunch Money’. ‘The Deviants Have Left The Planet’, ‘The Death Ray Tapes’, ‘Barbarian Princess’ and ‘Fragments Of Broken Probes’.

On a final note, Mick’s very last recording was the single for Shagrat records titled “Fury Of The Mob “ backed with “A Better Day Coming”, which was released in July 2013.