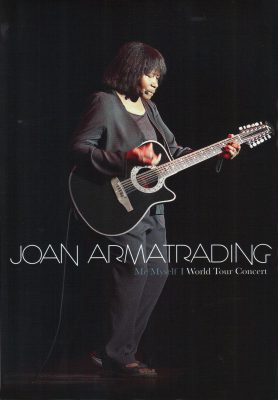 In 2014 acclaimed singer/songwriter Joan Armatrading embarked on her last major global outing. It took her almost two years, she played 235 shows and covered four different continents. In the UK alone there were 69 scheduled dates. Rather surprisingly this was the first time ever that Joan had gone out solo – no band, no backing vocalists, no dancing girls… It was just Joan, pure and simple, playing guitars and keyboard, talking about the screen footage of her history, touching on her many career highlights.

Trawling through her back catalogue, she encompassed blues, jazz and rock, singing all the great songs that first made her famous – Love And Affection, Me Myself I, Drop The Pilot, Willow – and many more. For almost two hours Joan held the stage. Not surprisingly nearly every show was a sell out and reviews were terrific.

Of course Joan Armatrading is one of the UK’s most significant female exports. She well deserved her place at the top of the Billboard blues chart when ‘Into The Blues’ came out. Her guitar playing was exemplary. Indeed in 2007 she not only became the first female UK artist of any colour to debut at number 1 in the Billboard Blues chart but she also became the first ever female UK artist of any colour to be nominated for a Grammy Award in the blues category.

Joan’s other accolades include an MBE, Grammy and Brit Award nominations, seven honoury degrees, a BA Hons (studied for on tour), Ivor Novello and Basca Gold Badge awards and a lifetime achievement Radio 2 Folk Award. On November 24th 2016 she accepted the Artists’ Artist Award at the MMF Artist and Manager Awards. Recently she has composed the music for the Donmar Warehouse’s ‘The Tempest’, currently playing at their King’s Cross space as part of their Shakespearian Trilogy series.

‘Me Myself I’ is, quite simply, unabridged Joan. The landmark songs, the rich, mellifluous voice, the accomplished musicianship – that’s exactly what the DVD and CD capture. For those who were there the DVD and CD are wonderful reminders of great night out, for those who didn’t make it they’re the next best thing!