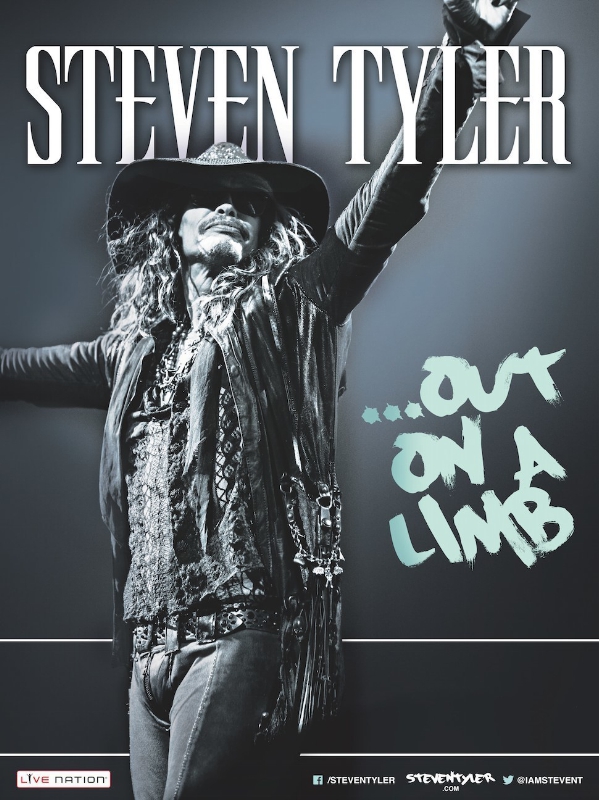 Following the success of his critically-acclaimed sold-out Lincoln Center concert event on May 2nd, Rock and Roll Hall of Fame Icon Steven Tyler is bringing “STEVEN TYLER…OUT ON A LIMB” across the country for a limited-run 19-city North American solo tour.

“STEVEN TYLER…OUT ON A LIMB” brings the legendary frontman to a series of intimate venues for a once-in-a-lifetime evening with rock royalty. Backed by his Nashville-based band, Loving Mary, the GRAMMY® Award-winning Tyler gets up-close-and-personal like never before as he shares his real-life heartaches, trials, and tribulations from his piano upbringing to worldwide fame and life with his band. In a time-traveling musical journey that spans his career, the industry Icon does not hold back as he recounts in-depth stories of his life from his musical ancestors in Calabria, Italy all the way to Route 440 and Nashville’s country music. Directed by award-winning director, Brett Ratner, the intimate concert performance “STEVEN TYLER…OUT ON A LIMB” first premiered at Lincoln Center’s David Geffen Hall as a benefit for Tyler’s philanthropic initiative, Janie’s Fund.

The show debuted to critical success, with Entertainment Weekly raving “Steven Tyler thrills at NYC’s Lincoln Center,” and Billboard noting “with the help of his new backing band Loving Mary and a stage-wide wall of gorgeous visuals, the evening was celebratory, revelatory, and, above all, fun.”

The tour, promoted by Live Nation, launches July 2nd at the Venetian Theater in Las Vegas and will run through mid-September. Tickets go on sale May 14th*. A full list of cities and venues is listed below. For more information and to purchase tickets, visit www.livenation.com.

One of music’s most recognizable and dynamic performers, Tyler has been cited by Rolling Stone as “one of the greatest singers of all time.” Tyler and Aerosmith have sold more than 150 million records worldwide and Tyler has won four GRAMMY® Awards, six American Music Awards, four Billboard Music Awards and an Emmy® Award. In addition to having nine number one hits, Aerosmith has received 25 Gold, 18 Platinum and 12 multi-Platinum album certifications. Tyler’s highly anticipated upcoming solo album is scheduled for release later this summer on Big Machine Label Group’s Dot Records.

“STEVEN TYLER…OUT ON A LIMB” TOUR