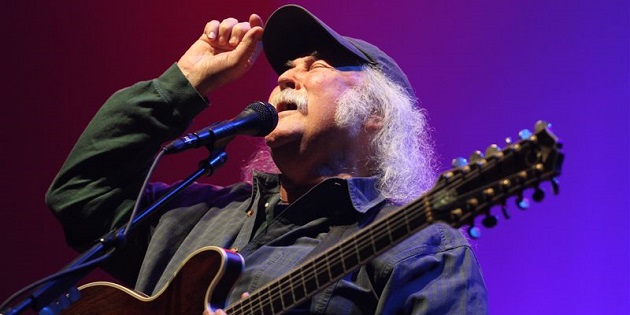 Legendary singer-songwriter David Crosby has announced a series of intimate solo acoustic tour dates for March 2016, where he will perform with only his voice and guitar. The shows will feature repertoire spanning Crosby’s entire career, including new songs from his critically-acclaimed 2014 solo album Croz, and his 1971 solo debut If I Could Only Remember My Name, as well as selections from The Byrds, Crosby, Stills & Nash, and Crosby, Stills, Nash & Young.

The solo tour kicks off on March 5 at Segerstrom Hall in Costa Mesa, CA, and will wrap up on March 26 at the Lensic Performing Arts Center in Santa Fe, NM. Other tour highlights include two nights at Freight & Salvage Coffeehouse in Berkeley, CA, the Neptune Theatre in Seattle, WA, and the Granada Theatre in Santa Barbara. “This is about the songs. The tale telling,” said Crosby. “Taking you on a voyage to my world for a moment”.

Crosby is a two-time Rock and Roll Hall of Famer, inducted with The Byrds and Crosby, Stills & Nash; he is also in the Songwriters Hall of Fame. In addition to his solo work, Crosby still tours and records with CSN, CSN&Y, and as a duo with Nash. He has written books— Stand and Be Counted: Making Music, Making History/The Dramatic Story of the Artists and Causes That Changed America, and the autobiographical volumes Long Time Gone and Since Then: How I Survived Everything And Lived To Tell About It.