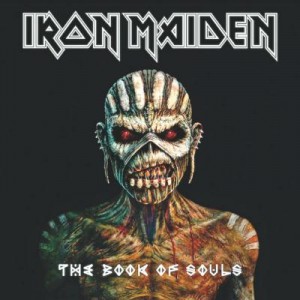 Five years of studio silence and finally, new and long-awaited album from Iron Maiden arrives on 4th September. ‘The Book of Souls’ is like a wanted child – it was not promised to be at first, then it was planned to happen, and then one of the parents got sick. But in the end all the troubles were gone and it happened. Band’s first double studio album has 92 minutes of length, quite unusual one nowadays, and contains the longest song in band’s history – ‘Empire of the Clouds’. Album is full of unexpected turns and twists. To be honest, I think you will need to give it few times to see all the beauty. With a brilliant opener ‘If Eternity Should Fail’, full of mystic feelings, demonic spoken words and recognizable Iron Maiden sound, you are being drawn straight away to a story of life and death. Album has band’s trademark gallop, progressive elements and absolutely stunning tale called ‘Empire of the Clouds’.

If you are a true believer in what Iron Maiden does, then songs like ‘Speed of Light’, ‘The Red and The Black’ or ‘The Great Unknown’ will please you. Those songs have a true spirit of the band and you guess the band even if you are not that familiar with their music. Bruce’s vocal is reaching the heights it used to reach; absolutely remarkable melodicism of album just helps that. In addition to that some drum parts pick up solos with loudness of local thunderstorm. Of course there are clichés in songs, but I guess when you have 15 albums behind you – it’s quite hard to improvise all the time. And still, even inside of cliché part, band makes some slight changes. Would it be just a bridge extended or wild back-and-forth chords – it all makes change in the end. It’s safe to say that album is still full of fresh approaches.

Iron Maiden can do it all

The title song is worth it – it turns as one of the heaviest things of the album, even with synth harmonies present. ‘The Book of Souls’ is exactly the song that will give personality to any album – it strikes out, it’s catchy and memorable. If you are not full with riffs yet – you will be after being hit with ‘Death or Glory’, ‘Shadows of the Valley’ and ‘Tears of a Clown’. They have it all – kicks, beats, huge bass parts and raging vocals. And then, unexpectedly to all listeners, will come finishing part. Two ballads will nail you to the place and make you wonder – how can you mix it all to sound so beautiful. Glorious ‘The Man of Sorrows’ will lead you to aforementioned ‘Empire of the Clouds’, which has the ability to be the greatest Iron Maiden’s ballad. Beautiful piano part by Bruce, accompanied by cello, violin and magnificent singing gives it a head start. But wait, song is 18 minutes long. What starts as a story full of feelings for victims of R101 airship disaster then turns into quite a lively piece just to end peacefully again. This song is a journey over classics and it closes the album in best way imaginable. Iron Maiden can do it all. The Book Of Souls can be “The Best Release Of 2015”. End of story.