Holy Moses no longer have anything to prove to the international metal scene. Their multi-faced thrash metal, Sabina Classen’s charismatic voice and their unique mix of traditional attitude and experimental evolvement have been establishing the band as a known quantity since the beginning of their career in the early 80’s. Their new album “Redefined Mayhem” is a prime example of an album which expertly blends past and present.

“Redefined Mayhem” will be released in Scandinavia on April 23rd, in Germany on April 25th, in Europe on April 28th and in the USA on April 29th through SPV/Steamhammer as CD, gatefold 2LP (coloured vinyl plus bonus track and CD) and as download. CD and LP have different covers.

“Holy Moses have never released standard thrash songs, and we never will,” Sabina Classen explains with some pride. “We write songs which we like ourselves and don’t compromise in terms of trends and concessions to wrong expectations. We don’t have to please everybody, we’re our own brand, we have our own sound, which includes the occasional odd beat, technically demanding passages and unusual chord structures as well as interesting lyrics which deal with the dark side of people and their minds.”

Redefined Mayhem sees Holy Moses 2014 reach a new pinnacle of their creative work. Their fans can look forward to a contemporary thrash metal oeuvre which reflects the band members’ influence while skilfully forging an arch to the group’s successful past with classics such as “Finished With The Dogs” (1987) and “The New Machine Of Liechtenstein” (1989). Classen: “It’s still first-rate thrash metal, fast-paced and powerful, chaotic at times but with a modern touch and amazingly multi-faceted guitars and drums.” 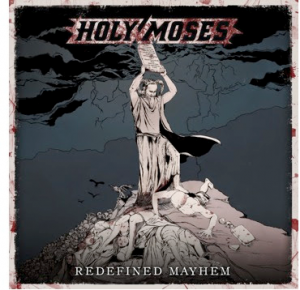 Tracklisting “Redefined Mayhem”:
01 Hellhound
02 Triggered
03 Undead Dogs
04 Into The Dark
05 Sacred Sorrows
06 Process Of Projection
07 Fading Realities
08 Liars
09 Redemption Of The Shattered
10 Whet The Knife
11 Delusion
12 One Step Ahead Of Death
13 This Dirt