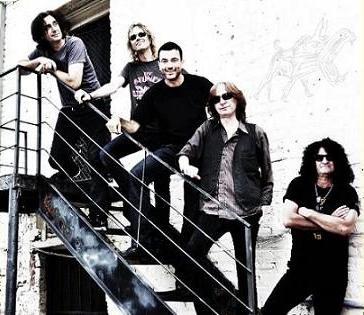 It is a stellar lineup, The Bullhounds are providing for their first release. The band consist of Sheryl Crow and Stevie Nicks’ guitarist, Peter Stroud, three former members of Southern rock legends Georgia Satellites and Danish business entrepreneur and music aficionado Erling Daell. They have joined forces to craft a genuine rock’n’roll record – ‘protector’ – which is out May 23 2014.

“It was central for me to make something pure. Today, much music is so overproduced that I cannot feel the life and the nerve. Above all, life and nerve is what rock’n’roll is about”, says Erling Daell. Daell has been the axis of the project as a chain reaction of coincidences, promises and positive response led him on a quest to create an album. He has known the former members of Georgia Satellites personally since the mid-90s, and hearing about his plans, they all volunteered to throw in their talents.

“This has all been realized by the urge to contribute, and it shows how far you can come by just believing in the power of rock’n’roll. So yes, we are the protectors of rock’n’roll”, says Erling Daell.

So rooted in the sheer joy of playing together, exchanging ideas and challenging each other, The Bullhounds have the crispness of The Black Crowes, Neil Young & Crazy Horse and the unspoiled energy of The Hives and Ramones. Daell has gathered songs from various sources such as a songwriting team whose merits include Black Sabbath and Thin Lizzy and former Georgia Satellites’ front man Dan Baird. This all to secure one thing: Powerful tunes in a powerful setting.